There is something dark afoot when an adult goes to Disneyland or Disney World unaccompanied by a child. All pretense has been abandoned.  Their ability to distinguish between what is real and unreal is now lost. Once someone is unable to distinguish between real and unreal they have become a Member of the Walt Disney Syndrome Gang.  They believe that everything has been created to give them an experience.

San Miguel is a dangerous place for anyone with that Syndrome. It is already unreal enough but without a Mexico Disneyland nearby to anchor them they begin to believe that San Miguel is San Miquel Disney.  They begin to believe they are in an amusement park and start to look for others to share the Disney Experience.  So another Gang was formed in San Miguel joined together by their belief that they are not in a real city but an amusement park. 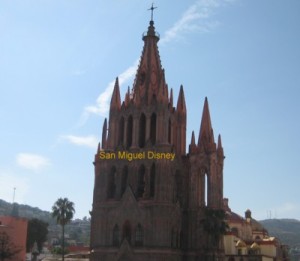 Gang members have created several experiences for all to enjoy in San Miguel Disney.

The Cobblestone Streets are one of the major rides in San Miguel. Walk on them, trip on them, and drive on them and you are on Magic Mountain.

The most fun ride in San Miguel, however, is the Topes Rides. You know the ride is ahead when you see this sign

The sign is deceiving but when you experience your first tope, be prepared for every part of your body to be jiggled.

One of the newest attractions in San Miguel Disney is the Liverpool Store. Grab a shopping cart and wend your way through all the exhibits of materialism. Most of the guides at the exhibit can both speak english and operate a credit card machine.

San Miguel Disney Bodega (owned by Walmart) is reported to be opening soon. Greeters, cheap cheap prices and items direct from China will highlight this new Exhibit.  See comment by Ned below for more details

Mega and Gigante are giant food courts with parking lots.

Given the artistic flair of San Miguel, one of the most popular experiences in San Miguel Disney is Finding the Artisan.

Wander into the Gringo Free Zones and you will notice the word Taller and o (useful spanish vowel) the word Artesano.  Often the doors to the Taller are open and since Gang members already think they are in an amusement park, when they peek in the door they see Gepetto or several of the Seven Dwarfs.

The first Taller is always special and then they realize that these workshops have been set up throughout San Miguel Disney.  Now they have a purpose – Finding the Artisan and enjoying the Artisan Experience. They think that Tallers are stores, that everything has been made in China but are never 100% sure because it looks to the naked eye as if the Artesano is making the product. There is so much fun to be had in the Taller.

The first experience is buying. The Artisan Finder sees things in the Taller that they saw in stores in Centro but at Factory Direct Prices. Well actually there are no price tags in a Taller and that means dicker time in the Taller. The object of dicker time is to pay no more than 5 pesos for anything. The Artisan Finder doesn’t believe they are dealing with a real Artisan but a poorly paid shop person who doesn’t understand what something is really worth.  Eagerly they search for the seconds table.

Some Tallers have living quarters for the Artisan and it is always fun to barge into their private spaces and take pictures of wood burning stoves or unmade beds or anything ‘interesting’. These pictures are called “How They Live”. A dead chicken, with its head still on, on a counter, makes a great picture.

The discovery of a new Taller requires a picture with the Artisan or a picture of you pretending to be making the speciality of the Taller. Since the Artisan Finder doesn’t believe it is a real workshop, it great fun to spend lots of time talking with the Artisan and generally living the whole Artisan Experience.

It often happens when the Artisan Finder returns home with their purchase and pictures and stories, that they realize they have a new calling. They are the Guides to Artisans in San Miguel Disney. They are the David Livingstones to the Gringo Free Zones. Everyone will offer up their car to them for the chance to experience a “real” artisan and Factory Direct Prices. To say you have driven a Guides to Artisans, to a new Taller, gives much status in San Miguel Disney.

As all the Tallers of San Miguel are discovered, some of the Guides have been forced to venture outside San Miguel Disney to Non Disney Mexico where they speak Spanish and where the residents refuse to go along with they belief that they are in an amusement park. So any trip outside of San Miguel Disney can be dangerous but the hunt for a new Artisan knows no bounds.