The Straw Hat is almost a clothing requirement to live in San Miguel.

But San Miguel is full people who want to be individuals and make their hat a selection a statement about who they are.  There is almost a competitive quality to it.

Either indecision or a need to be diffferent can cause San Miguel residents to push the Hat Envelop. 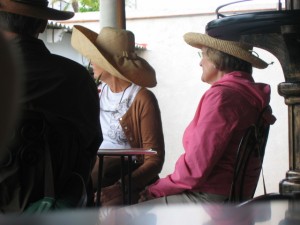 This picture is a chance to review what makes a Gang a Gang.

This woman has draped around her shoulders what she calls a shawl but her housekeeper calls a washing machine cover.

She has chosen the proper footware –  San Miguel Cocktail Combat Sandals.  She can now tackle the cobblestones on her way to a new Gallery Opening or her Art Class or her favorite Shop.

Her attention is fully focused on her new life’s focus – finding more jewelry to express who she is.  There appears to be no end to the amount of Jewelry a Gang Member needs.  Each Feria shows them another piece they must have.

When she turns to the right she will horrified to realize that she is missing the vital San Miguel Gang Requirement – the Clever Hat.

Hats make a big difference.  They complete an outfit and a look. Look at how uncomplete the woman is before she puts on her hat.  The hat with it’s simple black band protects you from the sun and proves that you are a part of a gang.  If a woman or man is without a hat then you know they are not gang members and are either forgetful tourists or rebellious.

Blocking UV rays explains the need for a hat but which hat creates the Hat Dilemma.  Here is a simple solution.

Sometimes an accident turns into an opportunity.

Muriel had just bought a colorful new wastebasket for her powder room at Fabrica Aurora.

To admire it more, she placed it on the seat beside her.  Her husband, not watching what she had done, sat down on the wastebasket, crushing it with his weight.  Muriel, horrified at her loss yelled at him to stand up and leave.

As he was leaving Muriel ever the artiste, no longer saw a crushed wastebasket but with a quick turn up of an end – a hat. She popped it on her head.  Her husband will return to a very happy woman.  A new Hat Gang has been created in San Miguel – the Crushed Wastebasket Gang.

Straw Wastebaskets have been reinvented and another household item has been used in a creative San Miguel Way.  Imagine Combat Cocktail Sandals and a Crushed Wastebasket Hat – powerful images.

There will be a learning curve with this gang.  This woman thought that any wastebasket would do.  Searching her house she found a Talavera Ceramic Wastebasket.  On her head it went and out the door she went.  It didn’t take long before she found that balancing it was too much work.

Here is the first picture of our Crushed Wastebasket Gang in the Jardin.

The pigeons posed a bit of problem at first but walking quickly soon sent them flying.

Be prepared for a shortage of Straw Wastebaskets in San Miguel when this new gang takes off.

Steve Cotton has correctly identified the inspiration for this Gang – Hedda Hopper.   She might have died February 1, 1966 but she lives on in San Miguel on the top of some heads.

Several days later, several new members of the gang are sitting in the Jardin dodging waste. 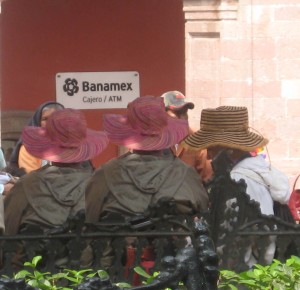 Hats are the easiest way to identify a gang. The first gang in San Miguel was the Classic Gang. They pure would never adorn their hats with anything but a simple black or white band. But it was hard to join this gang. You had to be rich, thin, have taste and own art. The later poorer and fatter arrivals with bad taste and a penchant for taking art classes couldn’t get in so they formed their own Hat Gangs.

The Flower Hat gang is mostly British and take their themes from past remembered wallpaper and bedspreads.

This is the Mixed Hat Gang who have captured a widower.  Some days there are slim pickens in the Jardin.  Well slim might not be the best word.

This gang originated in the United States. That gang colors can also be purple. They are not dangerous and mostly walk in the Jardin or sit quietly reading palms. They are not part of the Classic Gang. They drive Red VWs

There are lots of variations on dress style. The only unifying theme is the RED HAT

This Red Hatter has taken a cowboy Theme.