You are going to have to click on the picture to see what came to San Miguel the other day.

This travelling show is put on solely for Mexicans.

A few caged Gringos are paraded around town to build interest in the show. They are yelling at people

What don’t you all speak English?
Where can I get Dijon Mustard?
Help the poor Dogs

Inside the Big Tent is a production of the Glass Menagerie, two Art Installations, a live demonstration of Mexicaning your Casa Up, three hundred Real Estate agents with a deal for you, a booth manned by Democrats abroad asking for your support for Obama, many, many booths manned by the Doing Good Works Gang asking for support for a cause dear to only their heart.

Mexicans love to go and laugh at the Expats who are so earnest..

This for those of you who don’t know how to click on a picture.

San Miguel is divided into Colonias.  Some have been colonized by Expats.

The Beige areas are being colonized.  Expats and Expat houses are found  dotted through the area.

The Green Areas are Gringo Free Zones.  This is where the Locals live and few Expats who are tying to assimilate or are simply too poor to live elsewhere.

Most tourists never leave El Centro (the Brown Area).  The restaurants, shoppes and Gangs are all there.  There is no reason to leave the comfort of North America and wander elsewhere.  You can almost tell where El Centro ends and know that something dangerous lies beyond that point.

Occasionally, some Tourists decide to cross the line and enter a Gringo Free Zone as these Tourist have done in San Rafael. 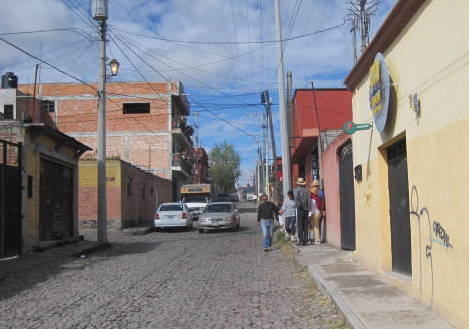 You can almost hear the conversation

San Miguel de Allende is in Mexico. Many residents of this town don’t realize that. They see Texas license plates, buy a local newspaper in English, see Starbucks, Dunkin Donuts and Subway and soon WalMart and assume they are in a dirty part of the United States that has no minimum wages.

When Stirling Dickenson founded San Miguel in 1937 he had no idea that people who moved there would form Gangs and change San Miguel over the years. As Gangs bought up almost all the houses in Centro and all the land with a view (LWV), this pushed Mexicans further and further away from Centro and the VIEW. But moving further didn’t give Mexicans a sense of safety because they would find members of the Cheap Gang looking for Cheaper and Cheaper Accommodation, next door. So they were forced to create Gringo Free Zones. Signs alert you when you approach one. 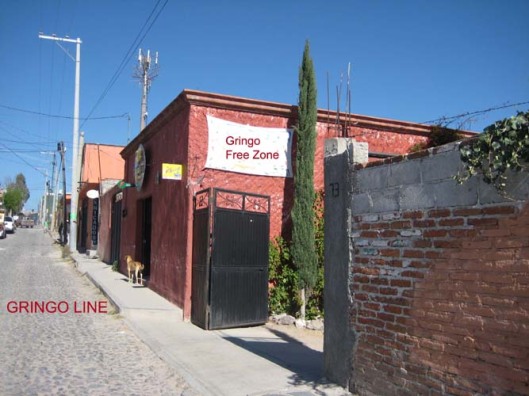 Tourists in SMA know nothing of this and this post is to alert them to the dangers in these Gringo Free Zones.

If you are a tourist and see this sign on the outskirts, DO NOT enter a Gringo Free Zone.

Gringo Free Zones have no lattes, no art, no wines, no maids, no dried flowers, no pretty painted houses, no one who speaks English and no cable TV. It is a scary part of Mexico and not at all like the United States. It is almost like a foreign country – so unSan Miguel. You will get no service there. So watch for the signs and KNOW.

Mexicans Find Ways to Use Gringas

Little is written or said about what Mexicans think of Gangs and Gringras. The closest analogy is the spread of milfoil or zebra mussels in North America. Once introduced they are difficult to eliminate. But the Tuesday Market has found a use for Gringas. They are a bit tough and utterly tasteless but with some salsa rojo o verde they aren’t bad.