To be a Good Tourist you need to follow these simple rules.

How to Treat Locals Rules 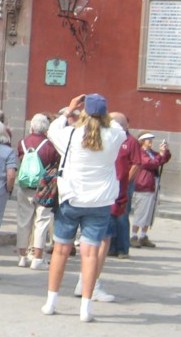 These rules are simply good manners and Bad Tourists do the exact opposite. The Bad Tourist exists everywhere. They are easier to identify when they speak your language as you can understand what they say and know they are a Bad Tourist. Everyone has their own stories of The Bad Tourist.

This group is not about colors or clothing but about the Story. In fact there are several Gangs that are about the story. The Too Many Gringo Gang, I Wouldn’t Want to Live There Gang and I Assimilated Gang are all variations on the Good Tourist/Bad Tourist Story. Sometimes it is a Good Gringo/Bad Gringo Story or a Good Expat/Bad Expat Story but the story line is always the same-  the clueless and the clued.

Members of the Smug Gang are always sensitive, aware and multicultural.  The Smug Gang is caught in the Travel Trap. It started with backpacking in Europe or South America upon graduation from college and continued until they Found Heaven and became that interesting person they always wanted to be.  The Smug Gang always find it better in a foreign country than they do at home – people in other countries are always warmer, friendly, more family oriented, happier, simpler, less driven by money than people at home. The Smug Gang speaks Spanish and several other language. They carry a wallet full of money from other countries. Wherever they are they sit quietly under trees hoping to overhear another Bad Tourist and have another Bad Tourist Story for Bad Tourist Story Night.